SIO in Solidarity with ‪FTII Pune‬ against the unfair Appointment 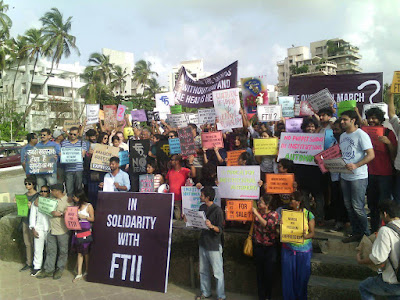 Recent appointment by the Information and Broadcasting Ministry of Mr. Chauhan has come under a lot of criticism by film industry and students community. A person who has an official affiliation with the ruling party and who lacks the vision and stature of the past chairpersons in film-making, has put a question mark on the process of selection for the post earlier held by eminent people like Girish Karnad, Shyam Benegal and Adoor Gopal Krishnan.

Many believe that the appointment would change the liberal culture of FTII which in turn, will impact the whole Indian culture and cinema.

Walking in the footsteps of SIO Pune , SIO Mumbai extended its support to the Film and Television Institute of India. SIO Mumbai took to the streets with the FTII students and other fine arts graduates at The Carter Road Amphitheater. Crowd of about 250 people young and old, male and female thronged the amphitheater to protest against the government’s proposal to appoint Gajendra Chauhan as the chairman of the prestigious institute. As a matter of fact all previous chairmen have always been active contributors in this field, which unfortunately Mr. Chauhan isn’t.

The largely peaceful protest saw the activist sing and dance to the tune of drum beats as they marched chanting slogans on the sea face promenade.SIO beleives in freedom of expression as well as freedom of education and we stand with a view that the current onslaught of the government on Institutes of National Importance will transform them into Institutes of Nationalism. We want to convey a strong message to the government that we all stand united against the saffronisaton of academic institutions across the country by some fascists forces. Members of SIO Mumbai also met Ms. Arunima Sharma the lead organizer of the event introduced SIO and pledged full support for the cause.